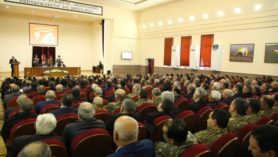 In his speech the President acknowledged the status and role of the Union in the Artsakh Republic history, noting that the organization has been carrying out an important mission of patriotic upbringing of the younger generation, has been taking an active part in the social life of the republic assisting to the process of solving social and household issues of the wounded servicemen families.
“During all those years the Freedom Fighters’ Union has been actively involved in the process of protecting the native people. In the event of any threat to the country the freedom fighters immediately go to the frontline, stand by the soldiers never paying attention to their age, sometimes ignoring even health problems”, underlined President Sahakyan in his speech, adding that the state would spare no effort in supporting and rendering assistance to the Union.