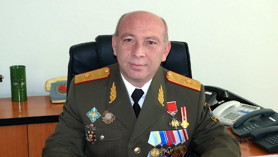 Dear compatriots, the devotee of Artsakh war Edmon Barseghyan would have turned 50 today but the mission that fell on him was a sacred duty of defence of our native land.

”It is not enough to be the son of the nation. You should be it’s fire-spitting soldier’. That was the motto of brave freedom fighter and devoted Armenian who didn’t save even his young life for the liberty and independence of Artsakh.

Today we can confidently say that his combat route is not only a lesson of valour but also a bright symbol of spirit, faith and united struggle.

Let us bow our heads in memory of our martyrs. Indeed, they laid down the foundation of our victory and they deserve equivalent assessment.

It is obvious that the chidren of heroes are also heroes. The bravery and valour shown by the young generation during the April war is an evidence of that. Due to it the military formations of aggressor were completely destroyed. One more time it was proved that the cohesion and  unity of nation are the pledge of the victory.

I am deeply grateful to the family of Edmon Barseghyan and to the teachers of secondary school of Askeran for upbringing such a patriot.

Glory to devoted and brave freedom fighters of heroic Motherland!

Glory to brave soldiers who gave their lives for the liberty and independence of the State!