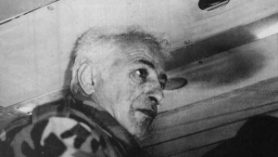 Dear compatriots, the devotee of Artsakh war Valery Maroutyan would have turned 75 today. During the war Valery Maroutyan was always standing next to soldiers  with scalpel and weapon in his hands. He accomplished many feats in field hospitals with his comrades-in-arms doing serious and complicated surgeries and saving lives of many freedom fighters. He was the main surgeon of the army and the founder of medical services and field surgery of Artsakh.

That was his sacred mission. The devoted Armenian and legendary doctor carried out his mission with great responsibility and exemplary devotion realizing desirable victory through stubborn struggle and efforts.

Today we can confidently say that every episode of his heroic life has instructive experience and necessary advice for the next generations.

The legendary doctor and brave freedom fighter unsparingly devoted himself to the liberty and independence of Artsakh.

The heroic deeds of Valery Maroutyan and his comrades-in-arms are invaluable.  Their heroic life is important lesson for the next generations and the best way of their military-patriotic education.

Honour and glory to the brave soldiers who built the liberty and independence of Artsakh!

Honour and glory to the Armenian army!

Honour and glory to Armenian nation that confidently makes its future!