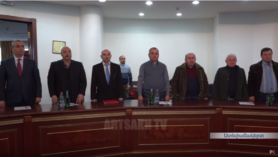 On 15 February solemn event took place dedicated to the  withdrawal of Soviet combatant forces from Afghanistan. The participants visited the Memorial Complex of Stepanakert to pay tribute to the Artsakh war martyrs. They also visited the park after Ashot Ghoulyan and laid flowers to the monument of legendary hero.

The head of the Union  of Afghanistan Veterans Vahram Ghahramanyan  made an opening speech. The member of the Administration Shirak Zaqaryan delivered a report.

Congratulatory message of major general Samvel Karapetyan was presented by the Chief of Staff of the UAFF Eduard Khachatryan. For public activity many veterans in accordance with the decision of the Administration of the Union were awarded with the medal ”Motherland Defender” and obtained valuable gifts in connection with Soviet withdrawal from Afghanistan.

The veterans of Afghanistan war are always in the spotlight. By their public acitivity they contribute not only to the state-building but also to the military-patriotic education of the young generation.