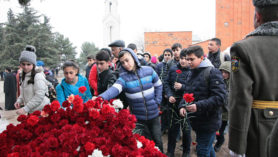 On February 28 in connection with the 31st anniversary of the Sumgait pogroms people of Stepanakert organized a march to the Stepanakert Memorial Complex and laid flowers to the monument of the innocent victims. The Sumgait massacres organized by Azerbaijani authorities was the answer to peaceful constitutional decision of 20 February 1988. The main goal of that genocide was to prevent the Karabakh movement and to avert the spreading of movement through terrorism.

The march organized on the initiative of the Union of Artsakh Freedom Fighters was not only the expression of remonstrance but also an appeal for struggle and vigilance. Paying tribute to the innocent victims of the Sumgait pogrom, the freedom fighters once again called the international community to qualify the  massacres of Sumgait as genocide and to convict the perpetrators who have gone unpunished up-to-date. If the Sumgait Genocide was recognized and condemned by the international community in due time, there would not be pogroms in Baku.