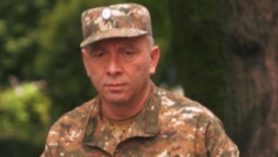 The Administration of the Union of Artsakh Freedom Fighters, uniting the army of more than thirteen thousand participants of yesterday’s war around it, expresses its deep concern over the recent provocative actions taken by the enemy in the direction of Tavush on the Armenia-Azerbaijan border and describes it as an open encroachment on Mother Armenia.

Moreover, calls for the recapture of Artsakh have already been made in public demonstrations organized at the state level in Baku, which once again confirms that the military-political elite of Azerbaijan has not learned from the disgraceful defeat in the first Artsakh war, as well as from the failures of the April 2016 four-day war.

In the course of such events, the councils of all the Community Association and territorial unions of the Union applied to the Chairman of the Administration of the Union, to express their readiness to join the Armed Forces of the Artsakh Republic in case of necessity, to stand in the defense of the Homeland.

Addressing the Supreme Commander-in-Chief of the Artsakh Republic, on behalf of all the members of the Union Artsakh Freedom Fighters, we assure you that today and from now on, we are ready to fulfill any task set by you for the protection of Artsakh and our national interests.