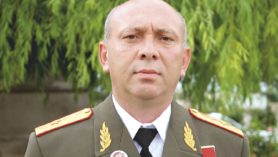 The Administration of the Union of  Artsakh Freedom Fighters shares the grief of the loss of the Major Garush Hambardzumyan, Captain Sos Elbakyan, Junior sergeant Smbat Gabrielyan, Junior sergeant Grisha Matevosyan and extends condolences to their families, relatives and co-servicemen.

Their heroic image will live on in the hearts of generations as a symbol of struggle. The behavior and deeds of the brave are not limited to the time they live, because their lives and destinies always live, becoming a lesson of courage and heroism for generations.

The Administration of the Union of Artsakh Freedom Fighters expresses its deep gratitude to the relatives and teachers of the martyred servicemen for raising such devoted, patriotic children. The Administration assures that the freedom fighters are always ready to stand by the soldier performing military service.

The Head of the Union of Artsakh Freedom Fighters,